After getting email after email and seeing all the mouth-watering photos all over Facebook, Melissa and I finally made the trek to Marievale to see the spotted crake (Porzana porzana). This pint-sized rallid is a summer resident of southern Africa, migrating from its European breeding grounds. However, they only rarely make it past Zimbabwe and Botswana to sunny South Africa. That being said, this season has been a bit different; spotted crakes have been reported from across the country including Kgalagadi Transfrontier Park in the Northern Cape, a private game reserve in the Eastern Cape, Sappi Stanger hide in KwaZulu-Natal, and now, Marievale Bird Sanctuary in Gauteng. Some have hypothesized that the glut of spotted crakes is a mini-irruption due to an extremely dry spring/summer in the northern wetlands of Botswana and Zimbabwe. This may have forced the crakes southwards and into any suitable habitat.

In addition to the spotted crake, two other national rarities have been hanging around Marievale, two western marsh-harriers (Circus aeruginosus) and a pectoral sandpiper (Calidris melanotos). Both have been present since at least December 2015 and although neither are new for Melissa and me, we needed them for our year list.

We woke up at about 4:45am to cold rain pouring down, a big change from the last month’s weather. By the time we arrived at Marievale an hour later, the rain had subsided a bit and we joined the 10 or 15 other birders searching for the spotted crake. There was plenty to distract us while looking for the crake including a yellow wagtail (Motacilla flava), a small flock of fulvous whistling-ducks (Dendrocygna bicolor), a single grey-headed gull (Larus cirrocephalus), and all the regular waders and waterbirds of the wetland. A few Cape clawless otters (Aonyx capensis) were feeding around the bridge, periodically popping up with a fish and hissing. A half hour after arriving, the alarm was sounded and the spotted crake walked out from behind some reeds. It proceeded to meander around the mudflats, in and out of the reeds, for about 45 minutes, seemingly oblivious to the now 30-odd birders watching it. In between admiring the crake, Melissa also spotted the pectoral sandpiper among a few other waders. It gave only some of birders views before being chased off by an aggressive ruff (C. pugnax).

The star of the show: the spotted crake perfectly camouflaged with the mud and reeds 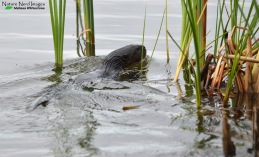 One of several Cape clawless otters that were knocking around

Another uncommon species: the yellow wagtail foraging in the mud

After having our fill of the spotted crake, we continued on to finish up an atlas card and to try to add a few more birds to our year list. Flamingo hide held a little bittern (Ixobrychus minutus) that quickly flushed out of the reeds. Continuing on, we found a trio of orange-breasted waxbills (Amancava subflava) drinking from a puddle. These little finches are wetland specialists, often found on the fringes in rank grass. Other good birds included little rush warbler (Bradypterus baboecala), common house-martin (Delichon urbicum), sedge warbler (Acrocephalus schoenobaenus) and white-winged tern (Chlidonias leucopteras). Before we left, as we made one more quick drive past Otter hide, a brown harrier flew over us. Its pale head and armpits confirmed it was one of the western marsh-harriers, our last rarity. We ended the day with 96 species recorded on our atlas card and 15 new species for our year list putting us both at 136 species for the year. 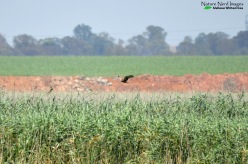 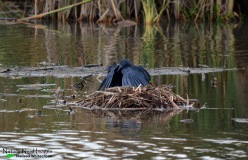 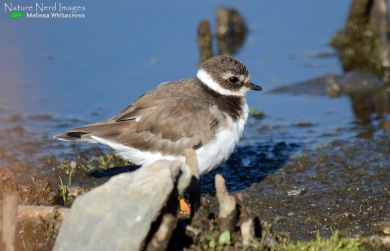 Another European migrant: the common ringed-plover

A squacco heron quietly surveying us