Today, we began our real Namibia tour. Our guide Dayne Braine of Batis Birding Safaris picked us up at 10 am and we headed straight out towards Sossusvlei in the southern Namib Desert. The Namib Desert is the oldest desert in the world. It has formed from Drakensberg sands washing down for millions of years and building up. The average dune in the desert is 60 million years old! Sossusvlei is famous for its huge red dunes, Dead Vlei (a former pan with camelthorn skeletons throughout), and the many animals of the Namib such as our main target the dune lark (Calendulauda erythrochlamys).

In order to get to the Namib from Windhoek, you must leave the plateau of Namibia and drive down the escarpment into the desert which takes roughly six hours without any stops. But being birders we stopped for everything.

Windhoek and its surrounds have had decent rainfall and so as we headed southwest, the Acacias and grasses were a verdant green and the birds were singing. We started the drive with a gorgeous great spotted cuckoo (Clamator glandarius) crossing the road before perching in a large tree and calling loudly. This was quickly followed by a single Orange River francolin (Scleroptila levaillantoides) skulking across the road and an ashy tit (Parus cinerascens) perched on a road sign. The river bed where we stopped for lunch was full of crimson-breasted shrikes (Laniarius atrococcineus) and chestnut-vented tit-babblers (Sylvia subcaerulea), all singing loudly.

A dapper sociable weaver on an Acacia

As we continued southwest, the habitat got drier and sparser. An hour or two after lunch we stopped at a small farm dam to inspect for ducks. We found the typical red-billed teals (Anas erythrorhyncha), Egyptian geese (Alopochen aegyptiaca), and three-banded plovers (Charadrius tricollaris) in the water but around the water was even more exciting. A pale-chanting goshawk (Melierax canorus) was eating a southern ground agama (Agama aculeata) on top of a sociable weaver (Philetairus socius) nest. The resident weavers seemed unconcerned by their carnivorous guest and were continuing to pop in and out of their messy nest holes. As we were about to leave, we saw a flock of birds fly into a tree, making little parrot-like screeches. And sure enough they were parrots, rosy-faced lovebirds (Agapornis roseicollis). Rosy-faced lovebirds are a Southern African near endemic species and they were Melissa’s 650th Southern African bird species!

Pale chanting goshawk with a snack

Rosy-faced lovebird darting to the next tree

It got even drier and we slowly began to descend further. We picked up plenty more arid specials like pririt batis (Batis pririt) (which is the mascot of the bird tour company we are travelling with), chat flycatcher (Bradornis infuscatus) and lark-like bunting (Emberiza impetuani). We had our fill of big birds with kori bustard (Ardeotis kori), secretarybird (Sagittarius serpentarius), and ostrich (Struthio camelus) on the side of the road. When we arrived at Spreetshoogte Pass, we tried for two rocky specials, the Herero chat (Namibornis herero) and the cinnamon-breasted warbler (Euryptila subcinnamomea). We dipped on both but we did find a confiding short-toed rock-thrush (Monticola brevipes), a few pale-winged starlings (Onychognathus nabouroup), and plenty of mountain wheatears (Oenanthe monticola) plus a gorgeous quiver tree (Aloe dichotoma) on the side of the hill.

At the bottom of the pass, we were in the beginning of the Namib. Trees disappeared and were replaced by small bushes and tufts of grasses. Some areas were completely barren gravel planes. After a quick petrol stop in Solitaire (famous for its delicious apple cake), we sped across the final stretch to Sossusvlei. Our last two new birds for the day were more big birds (both near endemics), the Ludwig’s bustard (Neotis ludwigii) and the Rüppell’s korhaan (Eupodotis rueppellii). We arrived at Sossus Dune Lodge at about 5pm, tired but happy. We saw around 43 species, nearly all of which were new for the year list. Melissa saw three new species and I got five new species. It was a great first day of our tour and tomorrow we are headed into the dunes to hike and hopefully find our dune lark. 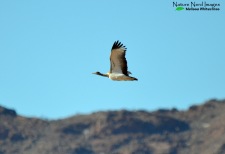 Ludwig’s bustard on the way to Sossusvlei 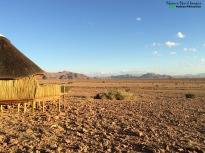 Giant sociable weaver nest at the entrance to Sossusvlei

The welcoming comittee to Sesriem Canyon and Sossusvlei